Emblazed across a fire-engine red baseball cap, “Make America Rage Again” stood in stark contrast to the idiocy of the presidential campaign and deftly summarized the mission for the revolutionary musicians who constitute Prophets Of Rage: Tom Morello, Tim Commerford and Brad Wilk of Rage Against The Machine, Chuck D and DJ Lord of Public Enemy, and Cypress Hill’s B-Real.  If “Make America Great Again” overlooked the fact that America was already great, the savvy streetwear-style flip of Trump’s campaign merchandise nailed the fact that America was already raging.

The seeds of Prophets Of Rage however, had been planted well before Trump. Rage Against The Machine’s first real tour was a west coast run opening for Public Enemy in 1992. And Cypress Hill took Rage out on the road in 1994. B-Real actually appears in Rage Against The Machine’s “Killing in the Name” video. They’ve been friends and co-conspirators for quite some time.

In the spring of 2016, in the midst of a tumultuous election, Prophets Of Rage joined together to combat the coming storm, whatever it may be.  The band performed a surprise set at the Whisky, debuting reworked classic Rage, PE, and Cypress Hill songs.  “When we first got together, we were playing songs from our catalogue,” Wilk explains, “but we were also playing new grooves and doing what we do with everyone improvising. And that felt really good.”  That July, they made headlines by staging guerrilla performances at the Republican National Convention. A nationwide tour and an EP soon followed, and during these crucial months on the road, the group evolved from protest performance art with a tactical mission, to a stand-alone entity with creative ideas all its own. Prophets’ 2016 EP, “The Party’s Over,” contained new renditions of old hits: while thrilling in concept, the record was tethered to its sources.

To tread new ground, they realized, they’d have to start from scratch. The group holed up with the producer Brendan O’Brien, a long time Rage collaborator—across just a month of sessions, they completed twelve songs.

“We had conversations about these ideas,” Chuck D remembers. “The conversation sparks a lyric, and a riff, and a groove, and a beat occurs. We were like, ‘how are we gonna start to make this album about these conversations?’” Their common ethos made the creative process effortless: each of their previous groups offered staunch, fearless opinions in their songs, and had “the same passion and the willingness to have the same stones thrown at you for it,” B-Real says. Whether through Public Enemy’s shouting down of institutional racism, Rage’s anarchist smears at Wall St., or Cypress Hill’s unending devotion to marijuana legalization, the members of Prophets Of Rage have been saying what they want, how they want, for decades. The material they began writing together stuck to the same principles: “Poverty hit home like a war zone / Check America’s pulse, heard a death tone,” B-Real sneers on “Unfuck The World,” a title Commerford cites as a favorite.

The sessions also created a new space for growth and progression, whether with the incorporation of DJ Lord’s turntablist elements or B-Real tackling broader subjects, such as homelessness on a song titled “Living On The 110.” Prophets Of Rage quickly became as much a shared experience between its members as it was a call-to-action for the world at large. “There was a language that all of us speak,” Wilk remembers. “It made perfect sense for us to make a record.” “We went on tour and got good as a band,” Commerford added. “We’re making music in the way that bands made music back in the day.”

At its core, Prophets Of Rage functions not only on a love of music, but on a deep belief in its power as a tool—Commerford even describes his bass guitar as a “loud, banging weapon.” “There were rhythms before there were words,” Morello says. “Music has both the ability to reflect and transform the times. There’s a long history of that, from slave spirituals, to ‘We Shall Overcome,’ to the Sex Pistols.” Woven into the band’s DNA are influences as varied as The Clash, KRS-One, and Johnny Cash, as well as the undeniable ideals and aesthetics of its predecessors: Public Enemy’s frenzied, racing textures, Rage’s jaw-melting riffs, Cypress Hill’s manically playful party energy. “The music is the passport to the world,” Chuck D says, describing the unique bond the group shares. “It’s not always a given to have members who want to go where few have gone.”

This idea rings true to Prophets, as they spread their message to underserved and overlooked populations worldwide. They may share a common language, but the members’ backgrounds are vastly different, providing the broad vantage from which they strike. Still, Prophets Of Rage remains as amorphous and unrestricted as ever. Their self-titled debut arrives via the independent label Fantasy Records, with artwork designed by the iconic artist Shepard Fairey. Post-election, there is at once less and more at stake: resistance now has no expiration date, and Prophets hope to symbolize what a lifelong devotion to the mission looks like. “We put the band together to both rock fools senseless and to mould the future in a more just and humane way,” Morello says. “The world isn’t going to change itself.” Or, as Chuck puts it, “You gotta stay woke—you better stay woke.”

Enter, stream & share to save lives 👊 Every action = a donation to The Coalition to Stop Gun Violence PLUS you could win a grand prize pack – check it: https://smarturl.it/POR-DriveToSaveLives 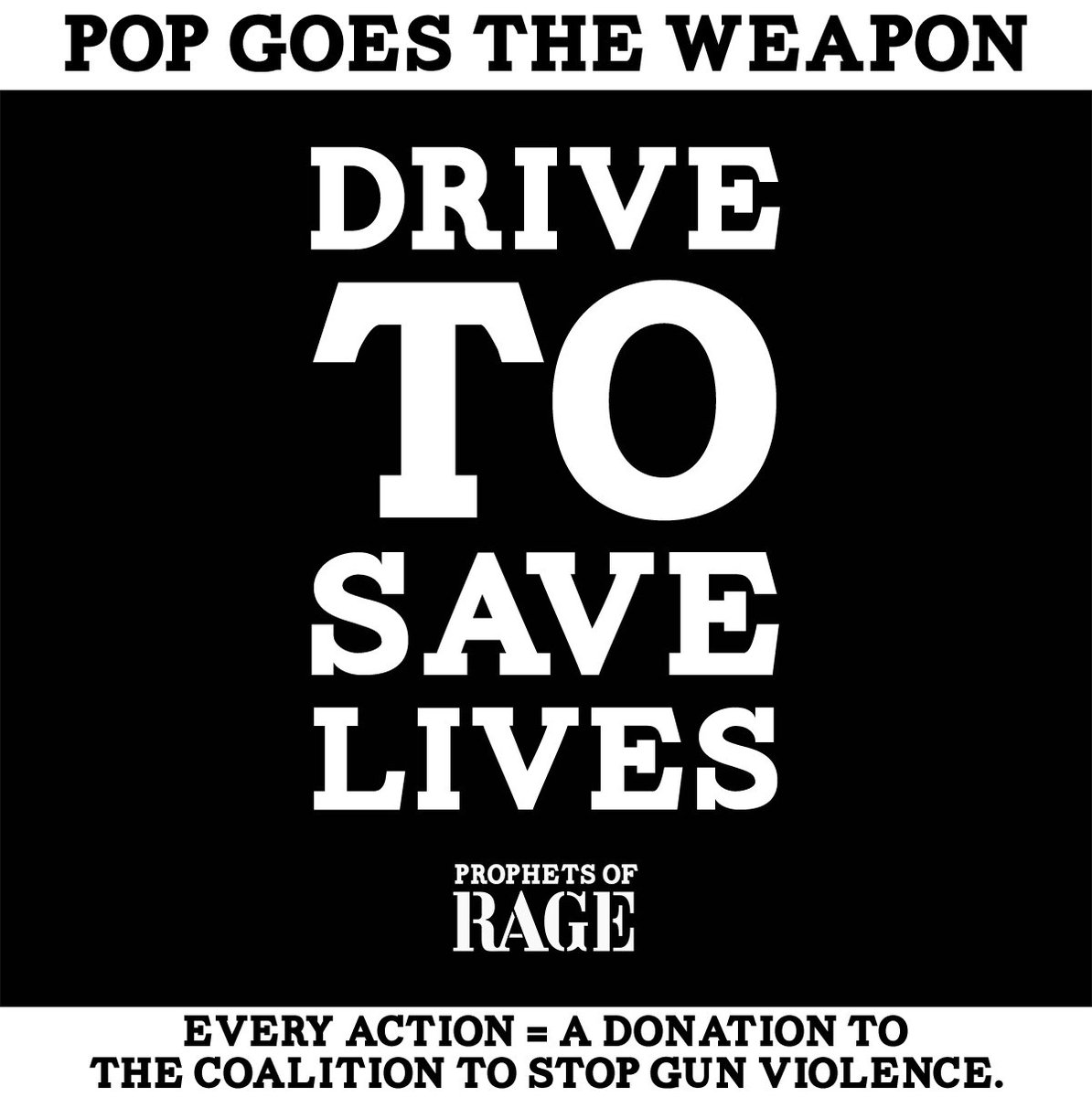 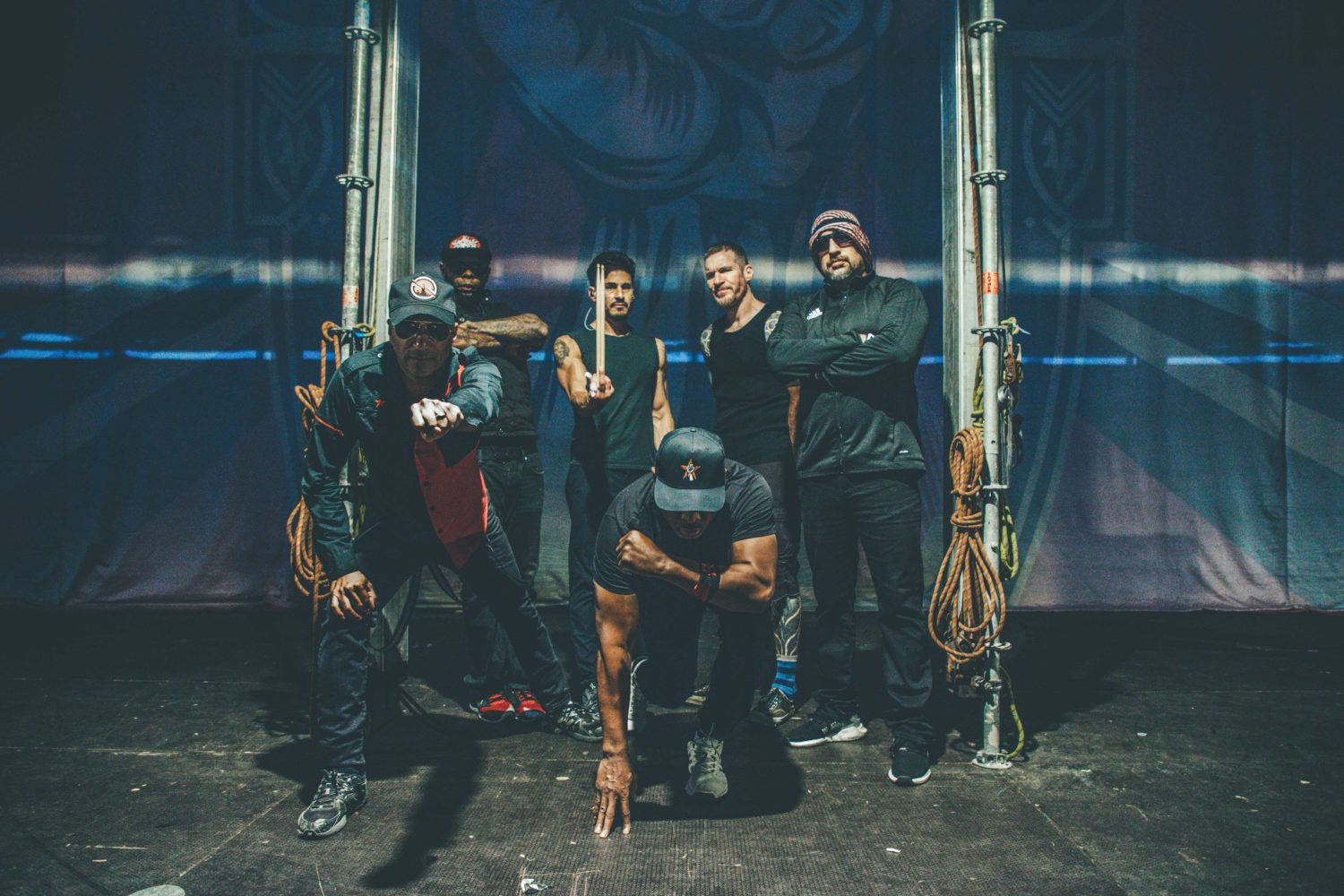 September 6, 2019 by fantasy in News ⋅ Prophets of Rage
Read more PROPHETS OF RAGE RELEASE NEW SINGLE “MADE WITH HATE”